On April 30 a standing room only crowd of 200 packed into the Musicians Union hall for the day long GN space organizing conference called Full Spectrum Resistance.  GN board convener Dave Webb, from Yorkshire CND in England, welcomed people who had come from all over the U.S. and from around the world.  Mixing music by Holly Gwinn Graham and Tom Neilson throughout the day, the conference heard local reports from key activists around the world and then listened to a panel discuss strategy.

Karl Grossman reported that Congresswoman Cynthia McKinney (D-GA) had called the GN office to say she intends to lead a fight to defund Project Prometheus, the nuclear rocket that is being funded at over $400 million in 2005.  Rep. McKinney is sending a "Dear Colleague" letter to Congress inviting them to join her in the effort.  (We urge all of our supporters to contact their  congressperson urging them to join her.)

The Sisters of Loretto brought a group of high school students from a rural Missouri community and one of them read a beautiful essay he had written about the impact of nuclear war on nature.  A second group of students, organized by GN board member Wolfgang Schlupp-Hauck in Germany, made a fine presentation outlining a more positive vision for 2020 than the current Space Command vision of control and domination of the heavens.

During one session it was reported that 12 of our friends in Australia had organized a solidarity action at an Australian space facility on April 29.  A second announcement was given about students at the University of Hawaii occupying the office of the university president in protest of the military industrial complex takeover of the institution.

A wonderful buffet dinner was catered and a fine group of kitchen volunteers, led by Carole Abrahams from New York City, kept the crowd eating and drinking all day long.

Dr. Michio Kaku, a GN founding member, was the first of two keynote speakers.  As usual, Michio received a rousing reception.  He was followed by Jenny Jones, the former deputy mayor of London who had come to New York as part of the Mayors for Peace delegation.

Each year the GN gives out a "Peace in Space" award to a person who has made extraordinary effort on behalf of the movement.  This year we gave two awards, both to Canadian activists, for their tireless and successful efforts to keep Canada from joining the U.S. Star Wars program.  The award went to Tamara Lorincz (Halifax Peace Coalition) and Steven Staples (Polaris Institute in Ottawa).  They each also made outstanding presentations during the conference.

Dave Webb presented a moving photo memorial of GN board member Satomi Oba who recently unexpectedly died.  Satomi, a past recipient of our Peace in Space award, lived in Hiroshima, Japan and we have created our 2005 Keep Space for Peace Week poster in her honor. 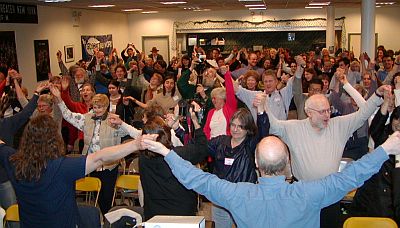 On Sunday, May 1 many of us from the conference gathered to march from the United Nations to Central Park.  We carried several GN space banners and were quite moved at the beautiful and creative line of march.  When we arrived at Central Park for the rally a huge peace sign was being created with the bodies of the marchers.  I had the honor of being invited to speak to the crowd and made good use of my time explaining how space satellites were used to coordinate the invasion of Iraq.  I also mentioned Bush's plans for deployment of anti-satellite weapons and the nuclear rocket.

The GN conference was truly a wonderful gathering of our global family of space for peace activists.  Once again we heard many people remarking about the loving and generous spirit that filled the conference.  We are grateful for all the work each of you do and look forward to many more gatherings in the years ahead. 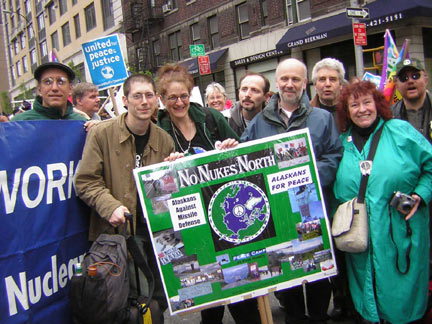 See also: Truly a Global Network also: Marches, Media and the NPT and more pictures from the demonstration.